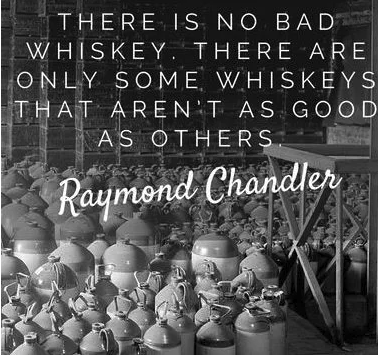 To understand whiskey properly, you must first start from the beginning. Whiskey was first distilled in the 1400’s in Scotland, according to early evidence. In England, it was the drink of choice, so it’s to no one surprise that when they came over to America to colonize the states, whiskey was brought with them. In fact, George Washington considered whiskey his favorite vice and he loved whiskey so much he opened his own distillery at Mt. Vernon.

Throughout history whiskey has been enjoyed by many reputable names like Mark Twain, Winston Churchill and Clark Gable. Whiskey has played such a big role throughout history that even now when one visualizes a well-established man; you picture him drinking a glass of whiskey by the fire.

American whiskey by taste is often sweeter than other whiskeys. They are aged in barrels and must be distilled in America to be categorized as “American Whiskey”. If the whiskey is distilled from at least 51% corn, its bourbon and if it’s bourbon distilled in Tennessee through charcoal, then its considered Tennessee Bourbon. Should it be distilled from at least 51% rye then it’s a rye . We are curious who named it rye because they weren’t very creative in the name. Scotch Whiskeys tends to be smoky and earthy and surprise…distilled in Scotland. However, they are aged at least 3 years, unlike American whiskey, which is distilled for about two years. Like American whiskey though, Scotch whiskey also has subcategories. Blended Scotch Whiskey is just a blend of Scotch whiskeys. Single-malt Scotch is distilled at one distillery from malted barley. Irish whiskey is obviously distilled in Ireland and like Scotch whiskey is also aged at least 3 years. It does however; tend to be lighter in flavor. We can’t leave the Canadians out; Canadian whiskey is light, but also fruity. They are typically blends and aged at least 3 years.

When it comes to drinking whiskey, there isn’t too much to it, but you should be educated on the different options. The decision to drink it neat (with nothing), with water or with ice is not just about taste, but often determined by the proof of the whiskey. When you add water or ice, you’re lowering the alcohol by volume (ABV) of the beverage. Example: one serving (1.5oz), a teaspoon of water will lower a 40% ABV whiskey to 30%. For high proof whiskey, experts suggest adding a little water to it. This will dilute the whiskey a little bit, but also to soften the punch of the alcohol. This allows the whiskey flavor to really come through. If you do choose to use ice (on the rocks) to chill your beverage, avoid using ice chips or the ice from your fridge. Opt into using large cubes or spheres because they melt slower due to a smaller surface area. Your whiskey gets chilled but won’t be watered down like it would have been had you used the ice chips from your fridge.

Before taking a sip, take a sniff. If it is a higher proof whiskey, the first sniff will smell mostly of alcohol so give it a second or maybe third sniff to get the true whiskey flavors in the old nostrils. Now it’s finally time to drink. Whiskey is not one to be shot or chugged, it is to sipped and savored. The initial sip should be minimal so you can roll it around your tongue. Don’t swish it like mouthwash; try to taste it with different parts of your tongue to pick out the different flavors. Remember how whiskey is always aged in wooden barrels? This means you will usually taste some classic flavors, like vanilla, toffee, or caramel. Once you have appreciated the features and taste of whiskey neat, with water and with ice, you can consider cocktails like a Manhattan or Old Fashion. From there forward it’s all about what your taste buds enjoy. You will acquire new tastes through the years, so a whiskey you once didn’t like could someday be your favorite. Never strike a whiskey off your list forever, always come back and try again.

All this work and effort just to drink whiskey will allow you appreciate whiskey and its complex flavors even more. For many, whiskey will always be their drink of choice…just as it was for many influential Americans throughout history.

Strategies for Pairing Spirits and Food at Your Event

When planning an event, whether it be a wedding, birthday party, or a corporate function, each of these gatherings can easily be elevated with two simple components: professional bartending services NC and delicious food that pairs perfectly with the cocktails provided.
Continue reading

POUR BAR SERVICES IS GROWING & WE WANT YOU!

​Do you have a passion for the event industry? Can you sell ice to an Eskimo and pants to a snake? Do you enjoy road trips? If you answered yes to these questions and are in search of an exciting new job, then POUR Bar Services’ vacant position of Western NC Client Relations Manager might be for you. Additionally
Continue reading
Next